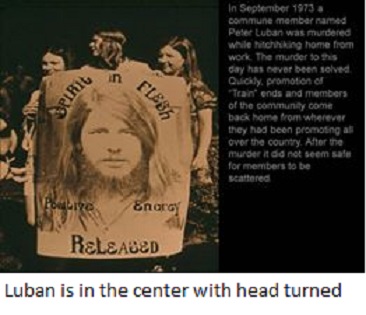 When the commune group “The Brotherhood of Spirit” was formed,  people from all over New England and elsewhere came together to live in a Utopian society.  Led by a charismatic leader named Michael Metelica Rapunzel, the group had several properties in the towns of Warwick, Gill and elsewhere in Massachusetts. In the mid seventies the group would soon start to change directions and thus changed their name to Community Renaissance. By the mid 80s the group would be fractured due to different ideologies as well as banning the founder (Metelica Rapunzel) from all of their properties.

The commune would entertain many members and their children over the years and that included many transients and locals that often had violent tendencies. In September of 1973, a member of the group named Peter Luban was murdered. The 18 year old had worked at the Whatley Diner and is believed to have been murdered as he hitch hiked to his home to 88 Main Street in the town of Northfield.  His body was found about thirty five feet behind a rest stop on Interstate 91 in the town of Deerfield, a few towns south of  the Vermont border.  Lubbans died from being stabbed in the throat. It was rumored that he may have been killed by locals that were upset with the presence of the commune in their community.  However, that has never been proven and to date, no one has even been identified as the killer of the young man.

Years earlier on January 1st, 1967, the body of 13 year old teenager Stephen Bak was found beaten to death in a snow gully at a Rest Stop on Interstate 91 in Whately.  The murder of the Northampton resident is not believed to be connected to Lubens.  His case also remains unsolved.