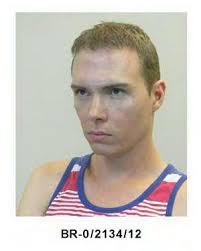 The Netflix show “Don’t F**k with Cats” detailed how a group of internet activitsts tracked down a man filming himself killing kittens and putting in on the dark web.

Soon the activists would notify police about a young man named Luka Magnotta, who was born Eric Kirk Newman.  The Canadian resident worked as a stripper, escort and appeared in adult films.  He also a criminal record which included fraud.  He was identified and his name given to law enforcement but nothing was done.

The saying goes that killers start with animals and gravitate towards humans.  That would soon happen to Magnotta as he would kill a 33 year old Chinese National named Lin Jun. He would video tape himself killing and abusing Jun’s body.  Magnotta would eventually be captured overseas and returned to Canada to face justice.  He would eventually be sentenced to life in prison.

For some animal abusers that post their crimes online, prison is not the only thing they have to worry about…..

It was around 9:28pm December. 21st, 2014, when David Wheelock was found dead from multiple gunshot wounds that he suffered from while inside the home he owned at 170 Pearl Street in the town of Keene, New Hampshire (USA).  Police think that someone in a brown Buick LeSabre or Buick Century killed the former military veteran. The 48 year old victim suffered from Multiple Sclerosis and was wheelchair bound.  He was also a registered sex offender due to possession of child pornography.

But there are troubling theories on the internet that Wheelock may have been involved in other sexual misconduct activities. A housemate of Wheelock named Nicholas A. Coll was eventually arrested for sexually abusing dogs.  It was not the first time that Coll had sexual relations with a dog.

It is possible that Wheelock’s killer may have been angry at him either due to his sex offender activities or as a result of his filming of activities involving the abuse of dogs.  Police believe that the killer may have been a white male in his mid-twenties.  But is also possible that the killer could be female.  When I asked a Keene Police officer about this case, they said off the record that they wanted to solve the murder but that there were a long line of other cases that were taking priority over this one.

There is a theory that an animal rights extremist(s) tracked down Wheelock from these videos and killed him as an act of vigilante justice.  Moral of the story.