It was Thursday, September 12, 1985, when a customer of the Gas & Save Station found employee, Carmen J. DeLuca, dead  inside a temporary office trailer located at 163 Bridge Street in East Windsor.  The 23 year old Agawam, Massachusetts resident  had been fatally shot in an apparent robbery and there were no witnesses to the 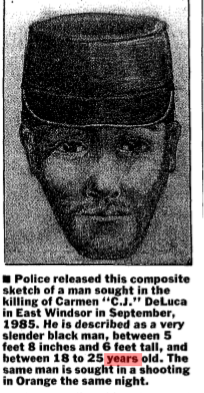 crime.Three hours later, a clerk of an AM/PM convenience store in Orange, Connecticut, was shot by a black male during a robbery. A bullet recovered from the injured clerk was matched ballistically to the bullet that killed Carmen DeLuca.  The clerk in the Orange shooting had complied with the robber’s demands but was still shot by the unknown suspect. A description of the killer in the Orange robbery was established.  He was a black male between 5’8″ tall to 6’0″ tall. He was skinny and around 18-25 years of age. The injured clerk in the Orange robbery also stated that the suspect was a passenger in a silver four-door Cadillac Brougham.  The killer had headed south from the East Windsor murder.  There is a possibility that the car could have been from Georgia.  But the killers could have been anywhere, even Connecticut.  Both robberies were near main roads, in the case of Deluca’s murder, it was only feet away from Interstate 91.

Anyone with information about the homicide of Carmen J. DeLuca should call the East Windsor Police Detective Division at 860-292-8240.