Delivering mail can be a dangerous job. Most of the trouble usually comes from dangerous driving conditions due to bad weather or from aggressive dogs. But sometimes violent people can be the biggest threat. 26-year-old Tyson Jerome Barnette was a mail carrier in the city of Landover, Maryland which is not far from the nations capital. Around 7:20 pm on November 23, 2013, he was found dead from gunshots in the 6000 block of Reed Street. Barnette was employed at the Post Service for 6 years and was described as a hard worker and nice person. There had been concern in prior months that postal carriers would get injured or worse because of delivering mail in dangerous neighborhoods at night. Barnette left behind a child. Because the crime was against a federal employee the person responsible for the murder could be eligible for the Death Penalty. A $100,000 reward is being offered by the US Postal Inspection Service for information that leads to an arrest and conviction in the shooting death of Barnette.

A Phone Call Ignored and A Woman Is Savagely Murdered 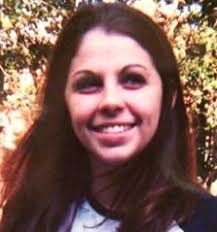 February 12th 2004, was the day that  Joy Harward was found murdered in a hotel room in Chester,  The 28 year old who lived in Annapolis, Maryland had been visiting her boyfriend who worked in the area of Chester.  They had an argument and she rented a room at a Day’s Inn on Edgemont Avenue in Chester at 1:38 a.m.  She had left the hotel room for about an hour and a and returned around 3 a.m.  She was last seen alive getting into the hotel elevator with an adult  black male.  It is not known if she had met or knew the individual in question.   Police believe that after Hayward went to her room, she realized she was in trouble and called the front desk of the hotel, who did not summon police or even check on her.  Hours later, a hotel worker would discover the dead body of Hayward.  She was raped, beaten and strangled to death. If you have any information about this case, please call Law Enforcement at 610-891-4703.  There is a reward for information that leads to an arrest and conviction in her murder. Additional information about this case can be found here at a blog by one of her sisters. http://joyhayward.blogspot.com/

It was October 1984 when a father and son went for a walk in the area of 120000 block area of Baltimore Avenue of Beltsville, Maryland when they discovered the decomposed remains of an unidentified man. The unidentified victim had been dead for about three months. The victim had been shot multiple times and was unidentified for over 30 years. In May of 2017, he was eventually identified through advanced technology and revealed to be twenty seven year-old ex-Marine Bennett Louis. According to a NBC New 4 Washington news story, Louis, had been honorably discharged from the Marines. He was originally from New Roads, Louisiana but was last seen sometime in 1983 while he boarded a bus in Berkeley, California that was headed for North Carolina. Louis lived in the town of Jacksonville. Police are curious to know what he was doing in Maryland. If you have any information about this murder is asked to call Law Enforcement at 301-772-4925. There is a reward of as much as $25,000 for information in solving who killed Bennett Louis.

Pregnant Woman Dies from Infection. Who was She?

On March 18, 1967 an unidentified white female was found in the town of Bear, Delaware. She had been placed in a white cloth Laundry bag that had the following on it; Bag O – Storage. American Laundry. Dry Cleaning. EX4 5277. The location of where she was found was at CR 400, Porter Road, which is 3 tenths of a mile east of Route 896. Victim had brown eyes, dark brown hair, was 5’5, and weighed 115 pounds. Her teeth were well maintained and she had a vaccination scar on front of the left thigh. It is believed she had died hours earlier from an infection. It is possible but not verified that she may have attempted an illegal abortion by using chemicals to kill the fetus. She was three months pregnant at the time and was anywhere between the ages of sixteen and twenty five years old. For more information about this case visit the Doe Network at http://doenetwork.org/cases/743ufde.html . If you know who this woman may be, please contact the Delaware State Medical Examiners Office at 302-577-3420. You can remain anonymous.

Woman Moves to Safer Town Only To Be Gunned Down

Paula F. Grossi had moved to her Rehoboth Beach home from the town of Wilmington partly because it had a lower crime rate. On January 26th 2007, two violent intruders forced their way into her home at the 36000 block of Winner Circle, in the Stable Farm development of Rehoboth Beach. Grossi was shot to death by the intruders and two other people inside the house were tied up as the

house was ransacked and robbed. Both suspects were described as white males. The first one (sketch) was around 40 years old, 5-foot-6, 200 pounds and had tear drops tattooed under his eyes. The second suspect was described as being 20 to 25 years old, 5-foot-7, 160 to 170 pounds. At one time the family of the victim offered a one hundred thousand dollar reward, which is no longer in effect. If you have any information about this homicide please call the Delaware State Police Homicide Unit at 302-739-5939 or call Crime Stoppers at 302-644-5020.

Murder of Woman a Mystery- Who Did She Meet Before She Died? 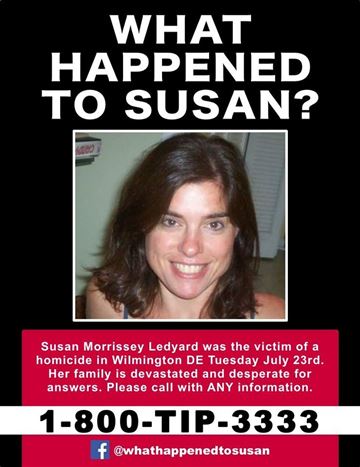 t was July 23rd, 2019 when a construction worker discovered the lifeless body of fifty year old Susan Morrissey Ledyard of Wilmington, Delaware in the Brandywine River.  An autopsy would reveal that the married teacher was a victim of a homicide and had been bludgeoned and drowned.  Her car had been found abandoned three miles from where her body was found.   In the hours prior to her death, she had been up, texting friends early into the morning.   No suspects have been named and there is a fifty thousand dollar reward for information leading to an arrest and conviction of the person(s) responsible for this crime.  IF you have any information contact the Delaware State Police Homicide Unit at 302-365-8441 or Troop 2 Major Crimes Unit at 302-365-8411.